A 38-year-old man brutally stabs his own pregnant wife to death in front of their common daughter, who was only three.

A Hungarian man from Szeged literally executed his own wife before the eyes of their 3-year-old daughter a year ago on the 6th of November, Origo reports.

According to most recent news, the now 39-year-old perpetrator faces prosecution by the Csongrád-Csanád County Prosecutor’s Office for the inhumane crime he had committed a little less than a year ago, says 24.hu.

The investigation has uncovered some dark details about the brutal murder. Last November, the Hungarian man in his late thirties who was also a husband and father of a three-year-old daughter, has attacked his wife with two knives.

Details of the slaughter

According to the evidence, the man attacked the women in their own bedroom. He has stabbed his seven-month pregnant wife to death with over 30 knife thrusts.

Unfortunately, the woman and the foetus could not be saved as they both died at the scene immediately.

According to the report, their common daughter had witnessed the blasphemous act from the corner of the bedroom. After the father killed his wife with two knives, he dressed his daughter up and got her into his car.

According to 24.hu, the mand had left the scene with her daughter by his car and drove to his mother’s house. The perpetrator had told his own mother about the barbarous murder. She immediately noticed the police about the crime and his son’s whereabouts.

Soon after the report, the authorities have detained the man in his mother’s house and started the investigation. The merciless killer had not confessed his crimes during his interrogation, but the investigation moved on.

The investigation finished only about a month ago, this September when the man in custody was charged with murder and foetal homicide with extreme malice. The police closed the case and sent the documents to the prosecutor’s office.

The attorney general’s office demands the sentence to be actual life imprisonment. 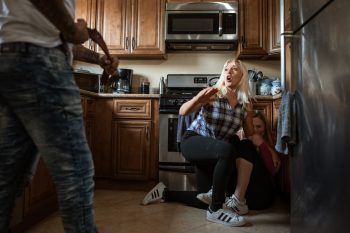