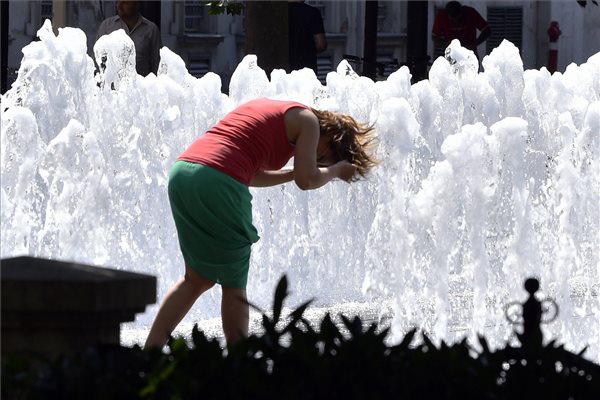 This week, an extreme heatwave can be expected in Hungary with peak values ​​close to 40°C degrees in several places. Accordingly, a red warning has been issued in most parts of Hungary until Thursday morning.

The red warning came into effect on Monday morning because the National Meteorological Service forecasts that the average daily temperature will exceed 27°C in most parts of Hungary in the upcoming days. However, a slight cooling is expected over the weekend. Besides extreme temperatures, minor thunderstorms can also be expected in some parts of the country.

On Monday, we can enjoy plenty of sunshine with no precipitation, except for the north-eastern part of the country, where there is a slight chance of local showers and thunderstorms. In addition to the waterfront and downtown areas, extreme temperatures ​​are expected in the Northern Transdanubian region. As Szeretlek Magyarország reports, during the day, the air heats up to 33-37°C.

The sunny weather will stay with us on Tuesday and Wednesday as well. Showers, thunderstorms and stormy wind may occur near the north-eastern border on Tuesday and the north-eastern, western borders on Wednesday. The minimum temperature will be between 16 and 23°C, with peak values ​​of 32-38°C expected on both days. In the middle of the week, the heatwave continues to intensify.

As the Hungarian news portal, Helló Magyar, reports, the warning intends to draw society’s attention to the special situation. Therefore, the Secretary of State asks everyone to call the regional dispatch service if they see a person in trouble during the extreme heat.

Extreme weather conditions are forecasted on Thursday and Friday as well, with a lot of sunshine, sporadic showers, thunderstorms and stormy wind in some parts of the country. On Thursday, the highest temperature can be expected in the country’s southeastern part with a maximum of 39°C. On Friday, the minimum temperature will be between 15 and 23°C, and the peak is expected to be between 29 and 37°C. The hottest temperatures can be expected in the eastern and northeastern parts of the country.

On Saturday, milder temperatures are forecasted. Despite a lot of sunshine and minor thunderstorms, the maximum daily temperature will be 34°C. At the end of the week, several hours of sunshine can be expected, with small showers and thunderstorms in some parts of the country. During the day, the air heats up to 27-36 degrees.

According to allergists, the next period can be difficult for allergy sufferers due to the extreme heat that can intensify allergy symptoms.

In the following weeks, grass pollens and in the second half of July, weed pollens such as ragweed pollen will spread intensively. Based on recent surveys, the number of people with allergies has doubled in the past five years, and today 30-40% of the population produces allergic symptoms. Thus, in addition to the extreme temperatures, it is worth getting prepared for a strong pollen season this summer.