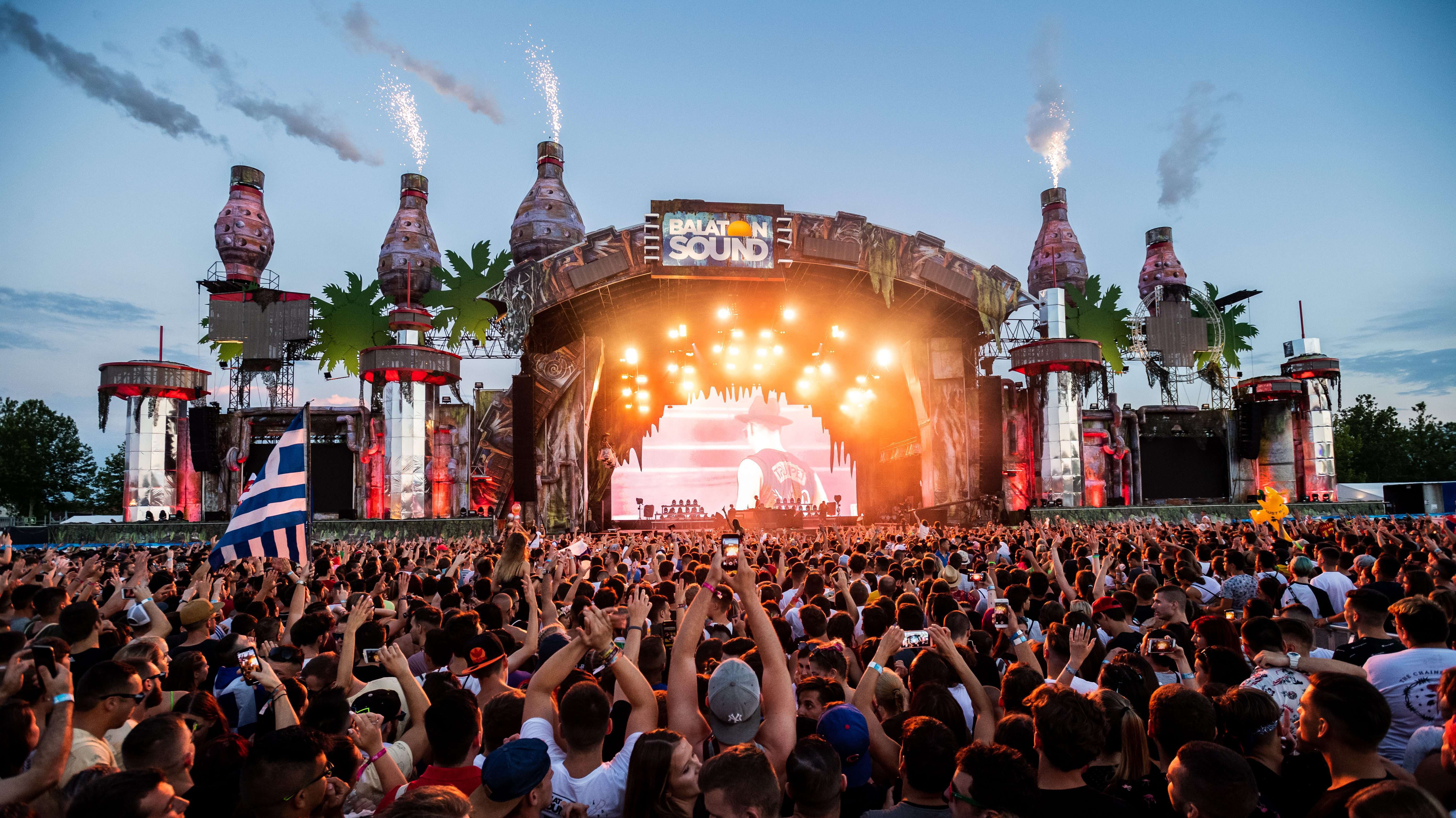 Balaton Sound 2019 – The festival beach lived up to its name. The weather was particularly gracious to BS this year; it was hot and sunny, except for Sunday when visitors could not escape a quick summer storm. But what else was different this year besides the weather? 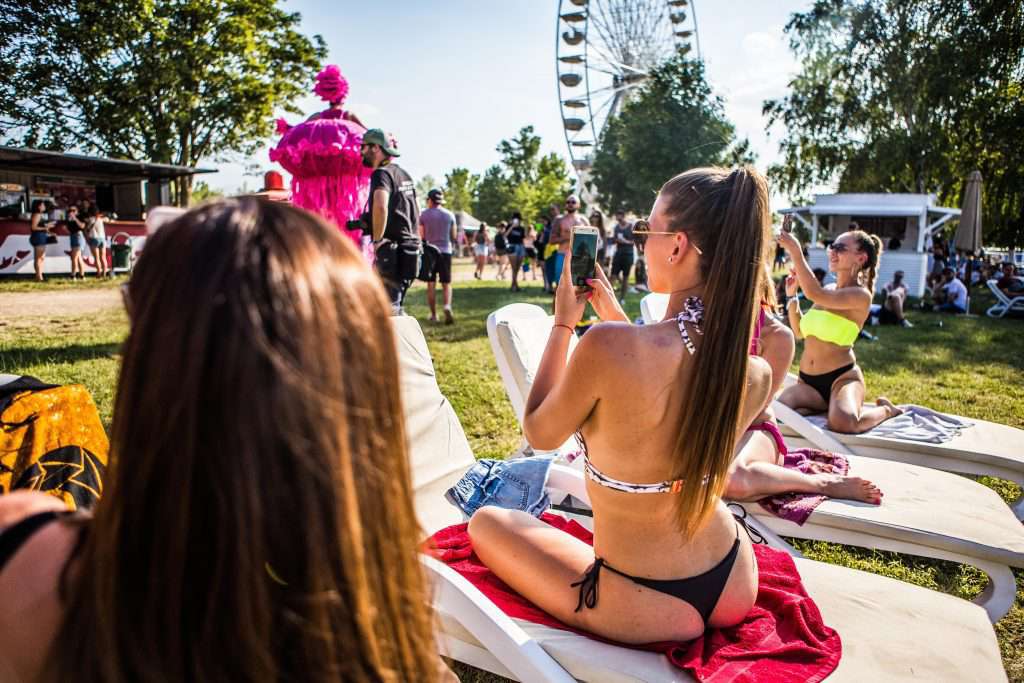 The first thing that caught my eye while I was sitting on the train to Zamárdi was a giant floating octopus in the air. As we entered the festival, we noticed that the giant octopus also had a number of friends and a giant ray buddy as well. 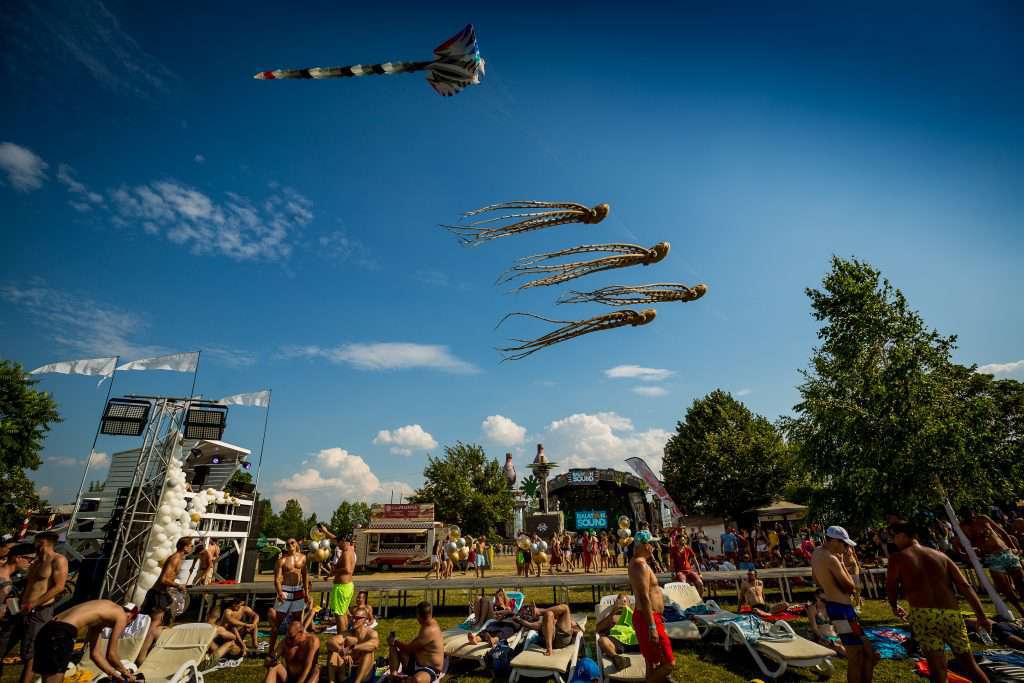 Organisers really wanted to make sure that if you bought a VIP ticket, you left the festival satisfied. Four VIP areas were built this year, 3 of these with a unique theme and vibe.

In front of the main stage was the all-red Circus-themed VIP with red carpets and furniture everywhere. 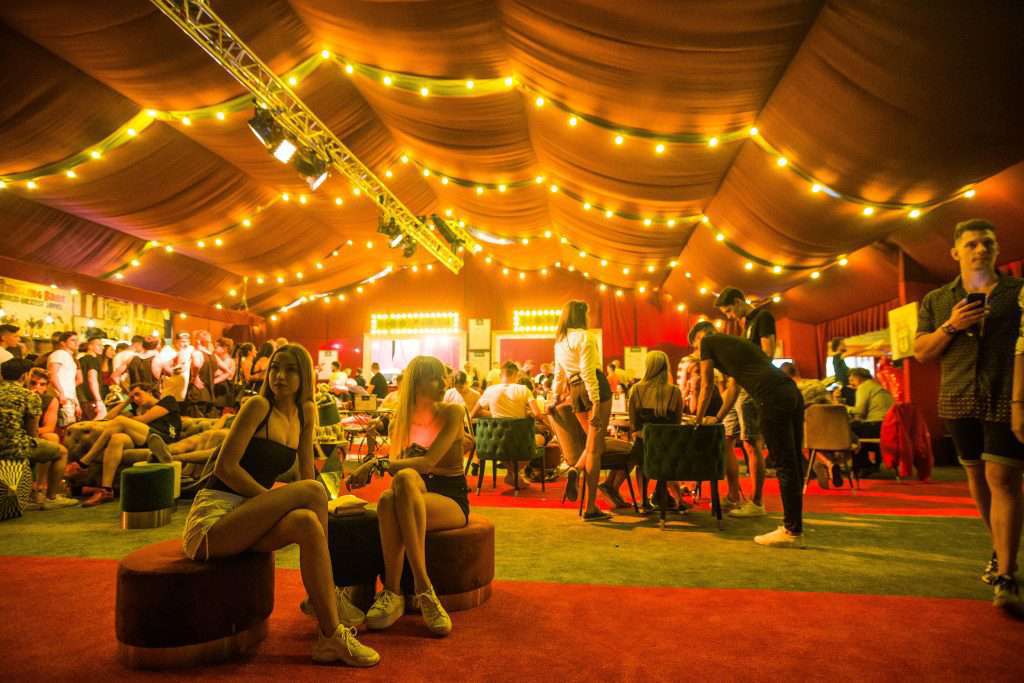 Next to the Elrow stage, there was the Elrow VIP, which had a tropical jungle vibe with plants and animals all over the place; parrots, flamingos, monkeys, etc. 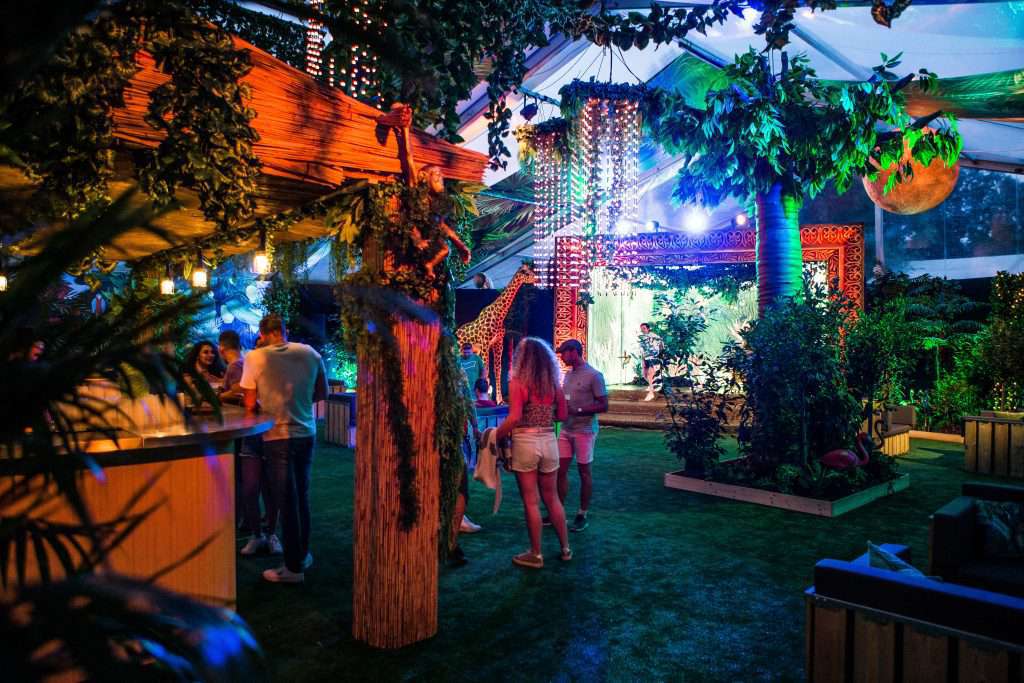 The VIP beach had its own small piece of lake Balaton. The décor was all-white giving off French riviera vibes. 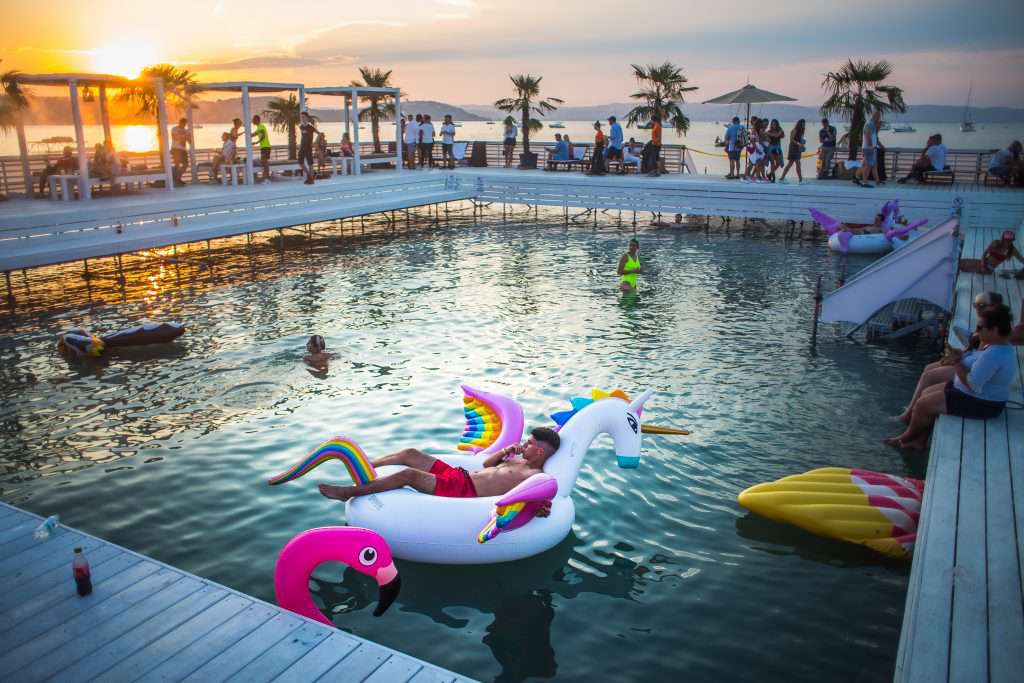 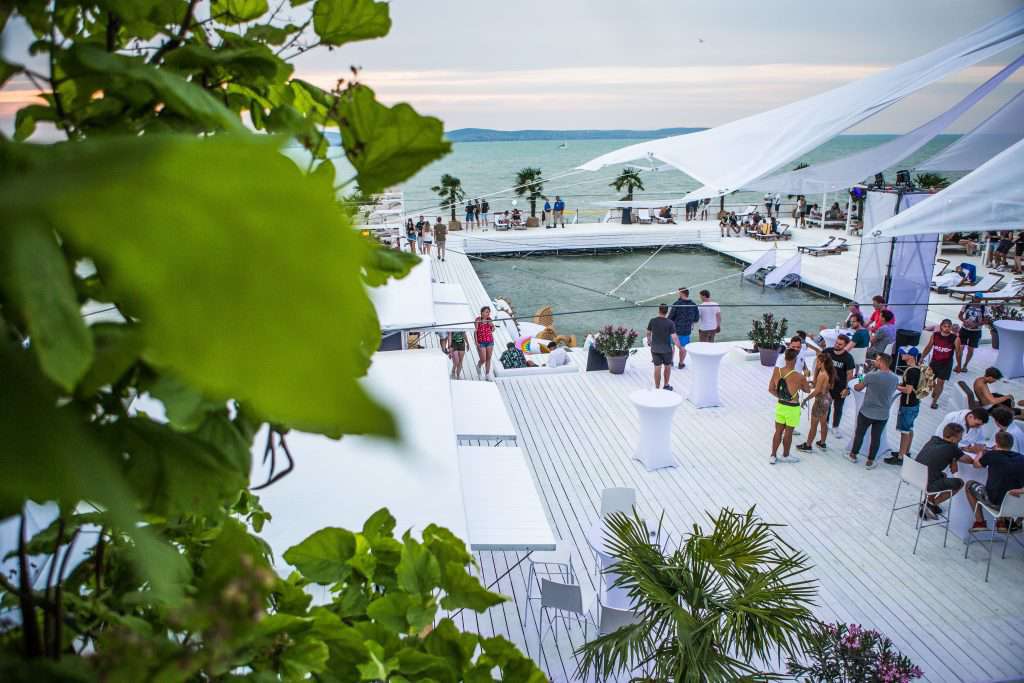 There was a fourth VIP area inside Dreher Arena.

People dressed up in all kinds of costumes were entertaining the festival-goers all day and night. 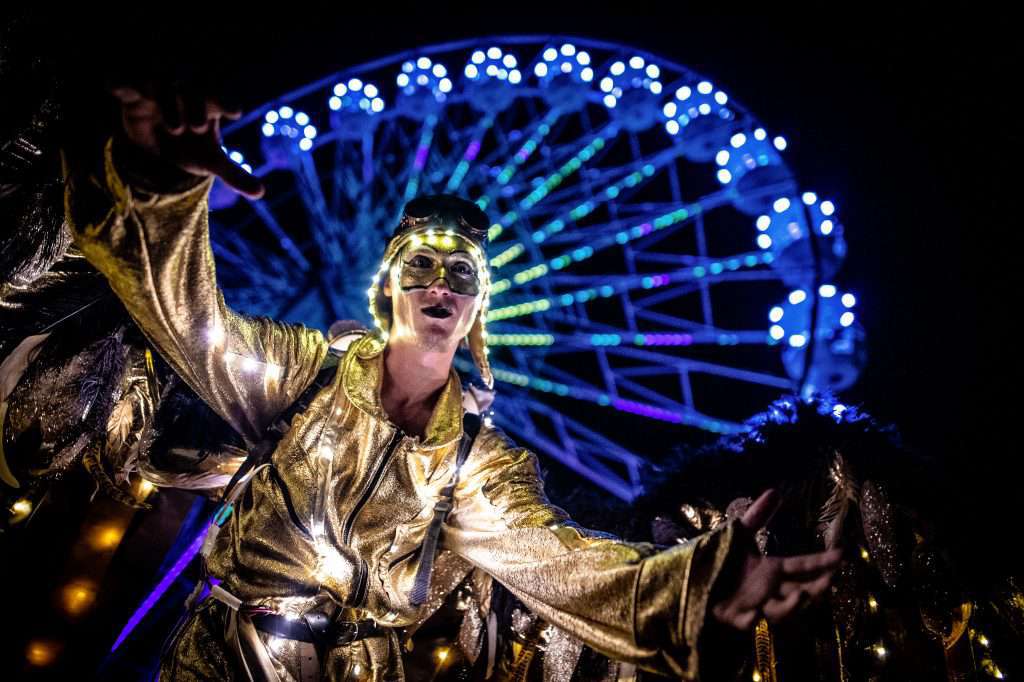 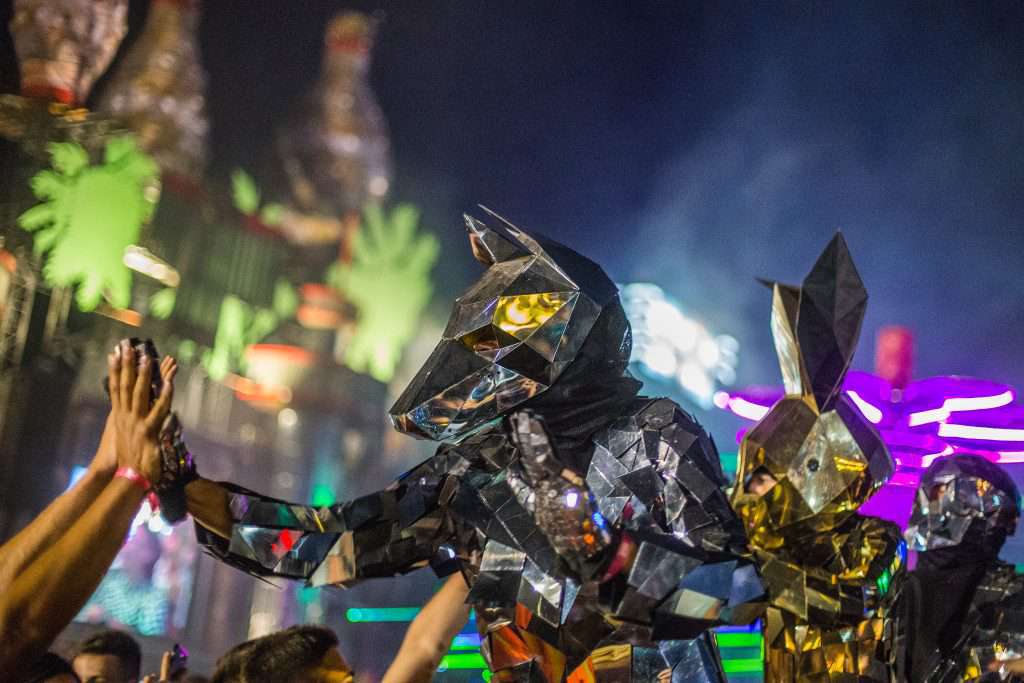 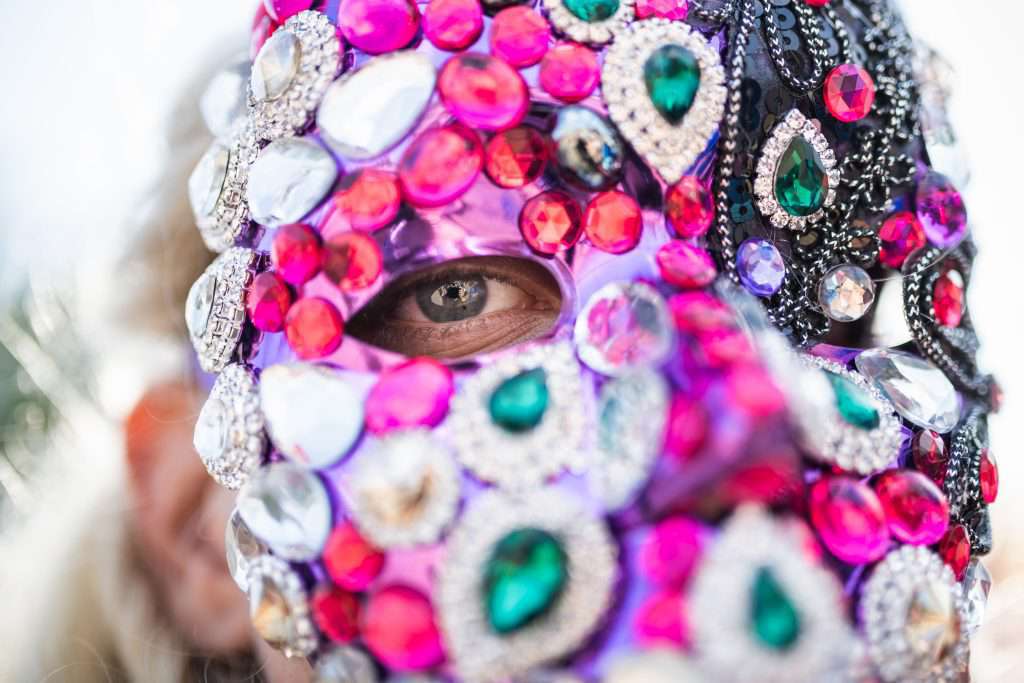 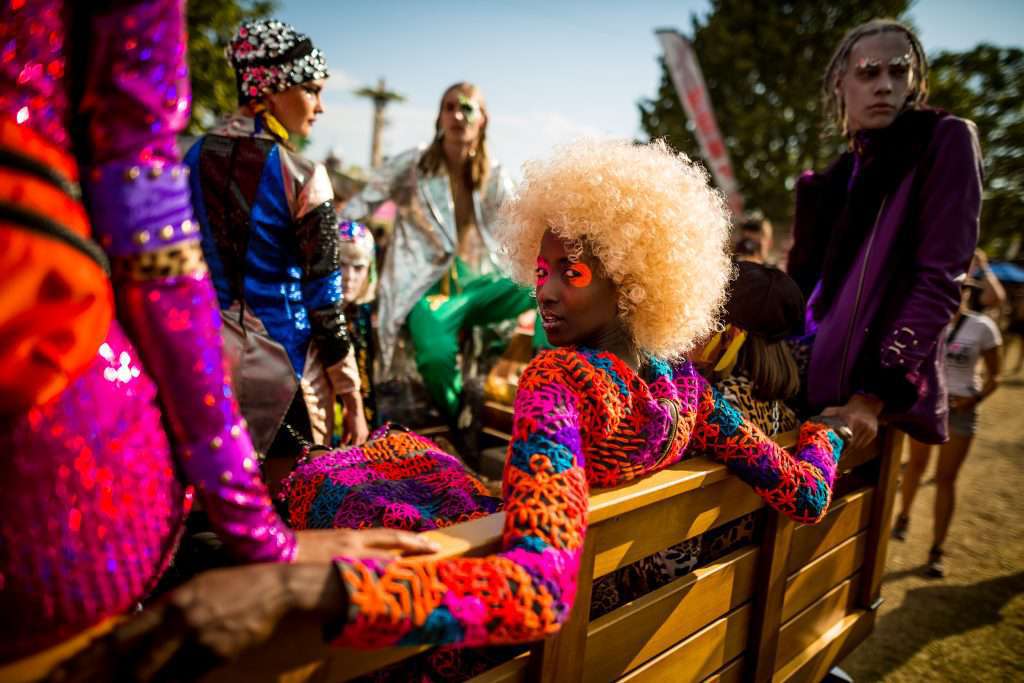 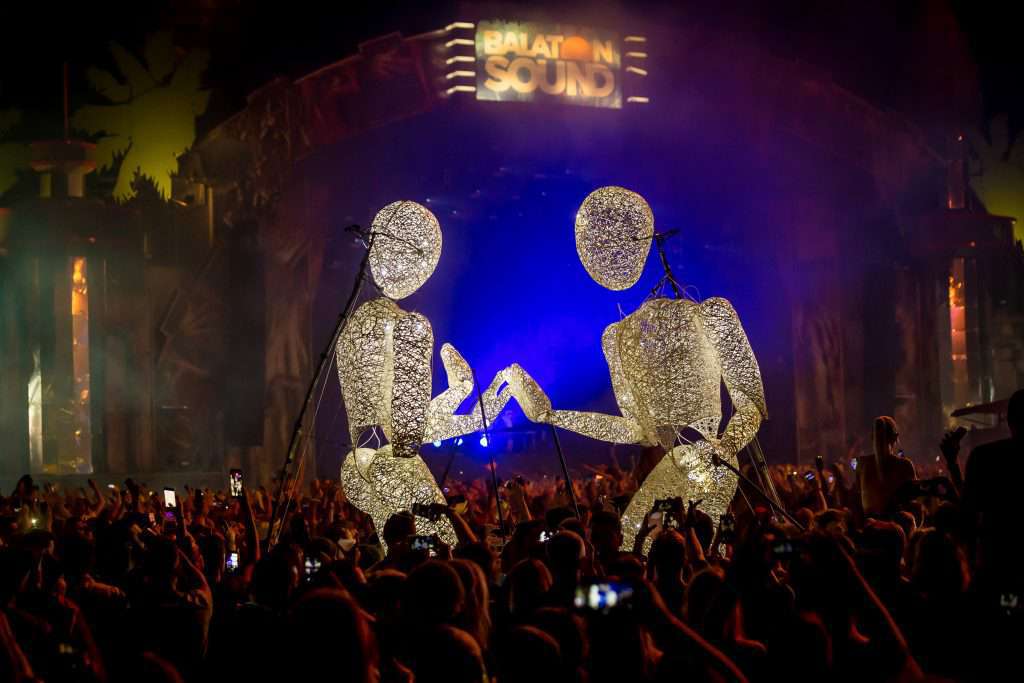 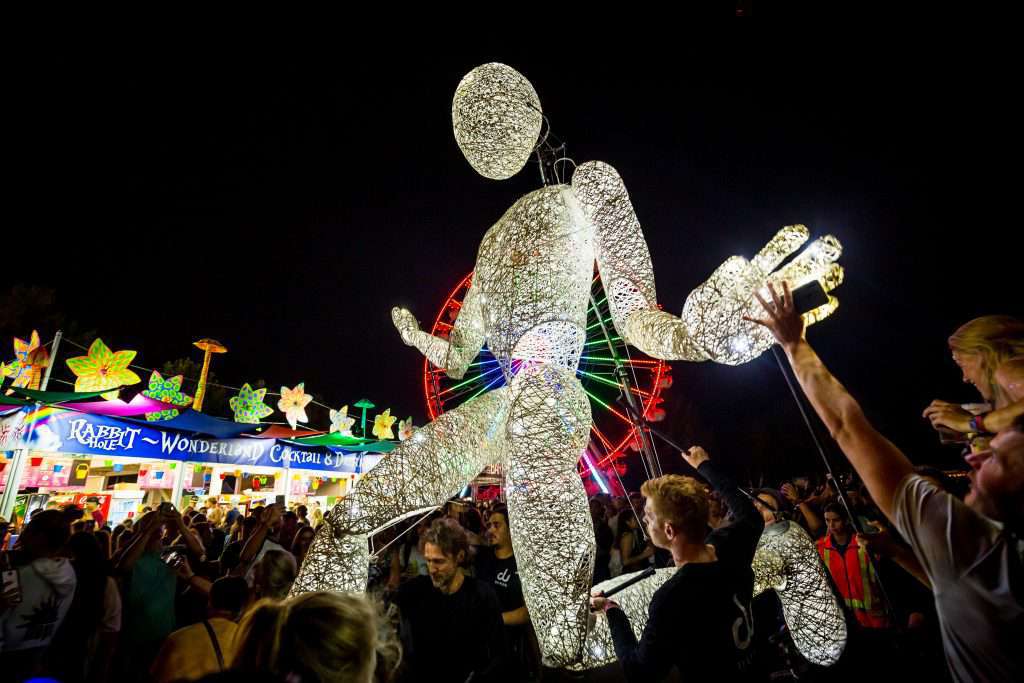 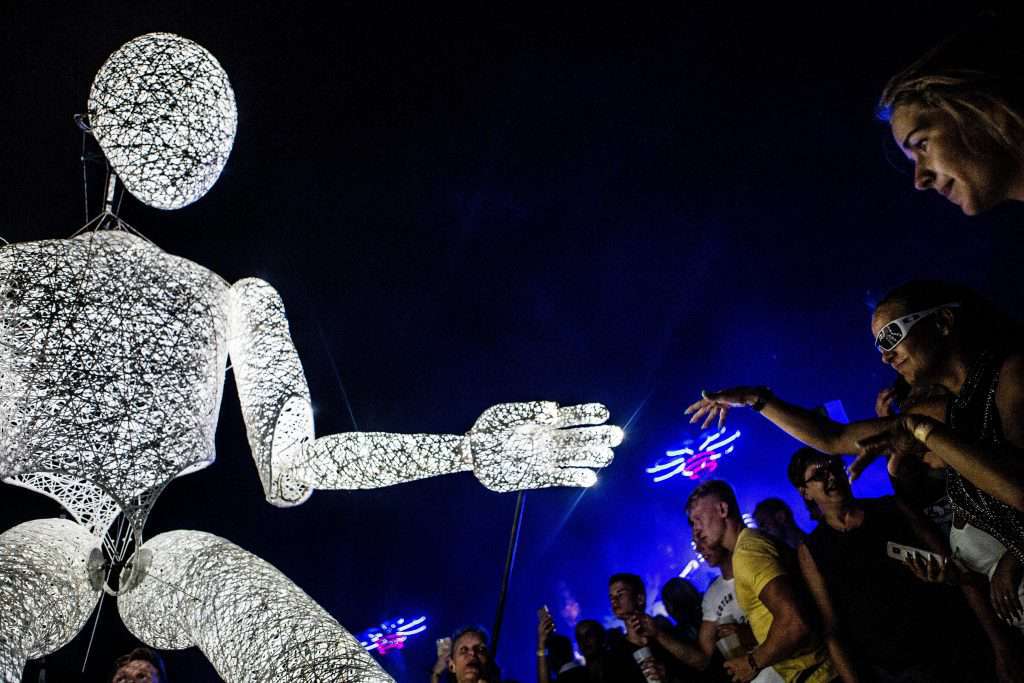 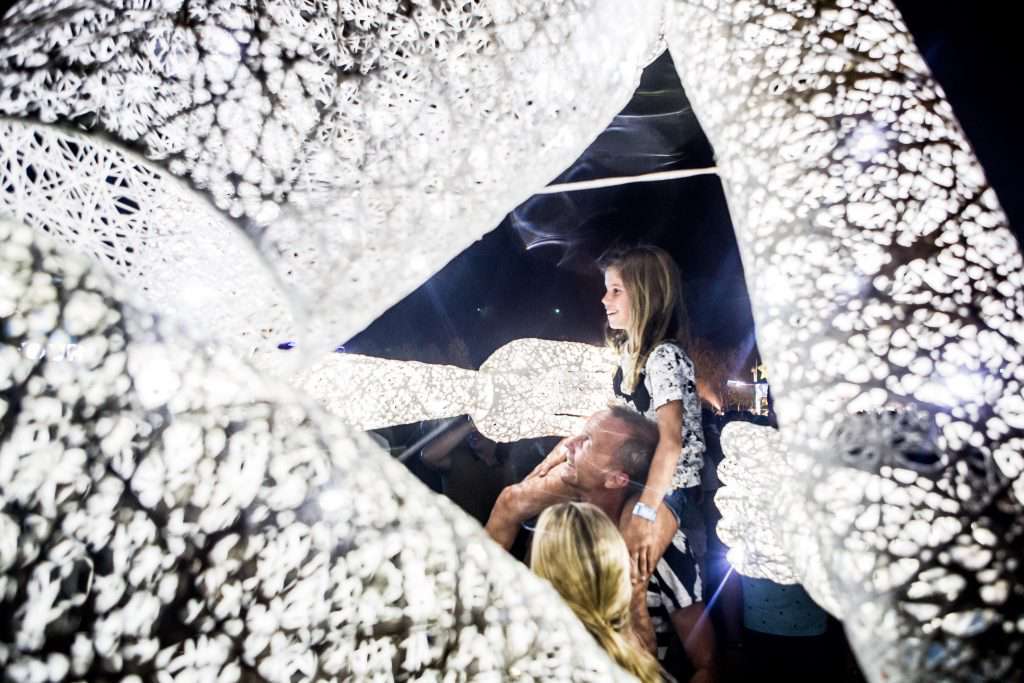 Last year, there was hardly anything to do during the day except lying on the beach. This year, many brands represented themselves and entertained visitors with activities and everybody’s favourite thing: free stuff.

For example, Halls brought cabins with cool fresh air and free gum, you could taste fresh Hungarian cherries, sausage and ham bites, and you could even try out a roll-over simulator. Among all the brands that were represented at the festival, Coca-Cola stood out the most, who decided to bring a whole other season to the summer heat.

Coca-Cola built a unique Christmas/winter set with a reindeer-driven sledge, a huge chimney, a snow canon, and the jolly white-bearded man himself: Santa Claus in a T-shirt, shorts, and a red Converse.

Visitors could take a photo with Santa Clause inside his hut (with a nicely decorated Christmas tree and a fireplace) or outside on his sledge, and get a free ice-cold coke in exchange. The set was an odd sight to see if you bumped into it randomly: Christmas decorations everywhere while our favourite Christmas jams filled the air, like the classic All I want for Christmas from Mariah Carey.

This year’s Balaton Sound was not the most fortunate one in terms of announced artists vs actual performers. There was hardly any day without someone cancelling their shows at the festival, including two of the most anticipated events: Sean Paul and DJ Snake. There were a lot of disappointed fans. 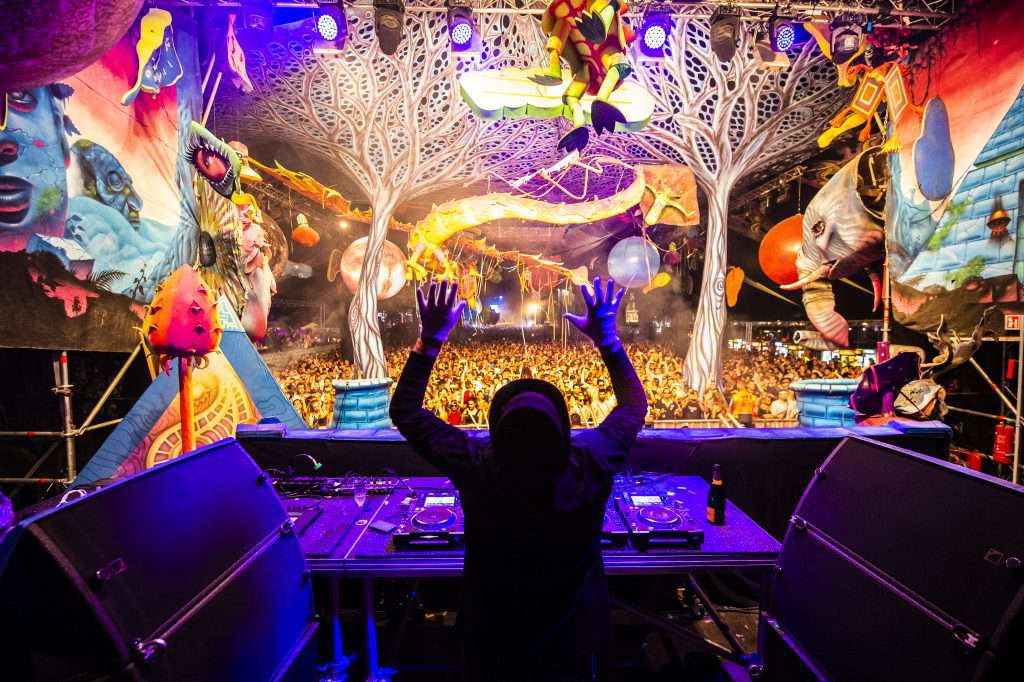 Luckily, the festival was able to replace them with Armin Van Buuren on Saturday, and Alesso on Sunday. However, those artists who did perform at Balaton sound 2019 gave BIG shows. The crowd loved G-Eazy as well as Alesso and all the others.