The 10 best ways to spend the winter holidays in Budapest

Hungary is often referred to as the ‘heart of Europe’, and it will surely make your heart tender and joyful if you visit the heart of Hungary, Budapest. When it comes to December and Central-Eastern Europe, the first city that pops into mind might be Vienna, but let us assure you that the Christmas fairs and events are just as lovely in Budapest too.

If you need more reasons to visit Budapest, then Travel Pulse’s compilation of the best holiday programmes in the Hungarian capital city will come in handy.

There are numerous Christmas fairs set up in Budapest, usually in close proximity to each other; take for example the fair in front of the magnificent St. Stephen’s Basilica and the market at Vörösmarty Square. Interested in more? We have a few suggestions for you to check out if you would like to get in a Christmassy mood and would also like to get to know Hungarian folk traditions while sipping on a mulled wine.

If you have a sweet tooth and/or are keen on trying special desserts, then we suggest trying the chimney cake, a traditional Hungarian cake, specific to Szeklerland – it is crunchy on the outside (coated in either walnut, chocolate, coconut, sugar, sprinkles and many other things) and irresistibly soft on the inside.

Another traditional cake that is never missing from the Christmas table in Hungarian homes is the bejgli, a rolled sweet bread filled with minced walnut or poppy seed.

The ice rink at the City Park is not an ordinary one; after all, the park’s lake serves as a skating rink during the winter chills. On top of this, the rink has a scenic setting, as you will find the Vajdahunyad Castle behind it. This way, your holiday photos will be extra special.

After a long tour in Budapest, you really deserve to sit back and relax in a hot tub, for which the various spas of Budapest are just the thing. The Széchenyi Bath is not only one of the largest hot spring spas in Europe, but it is also lavishly decorated, so both your body and mind will be thankful for this experience. Did we mention that it is open even on Christmas day?

Or you could consider dipping in the waters of the Lukács Bath, which is open on every Saturday,

where even spa parties are organised, proving that baths can be colourful and fun – brought to you by popular DJs, a laser show and a cocktail bar.

If you still have no idea where to spend the New Year, then one of these parties might be the right choice for you.

If you would like to breathe in healing steams and history at the same time, the Rudas Thermal Bath is just for you. What makes the Rudas Bath so special? First, it has a long history, since it was a medieval Turkish spa. Second, it is open until 4 in the morning on Fridays and Saturdays, so if you are horribly jetlagged, you can give your body a refreshing rest here. There is an outdoor swimming pool on top, from where you can watch the lights playing on the Pest side of the city, as well as on the Elizabeth and Liberty bridges at night. 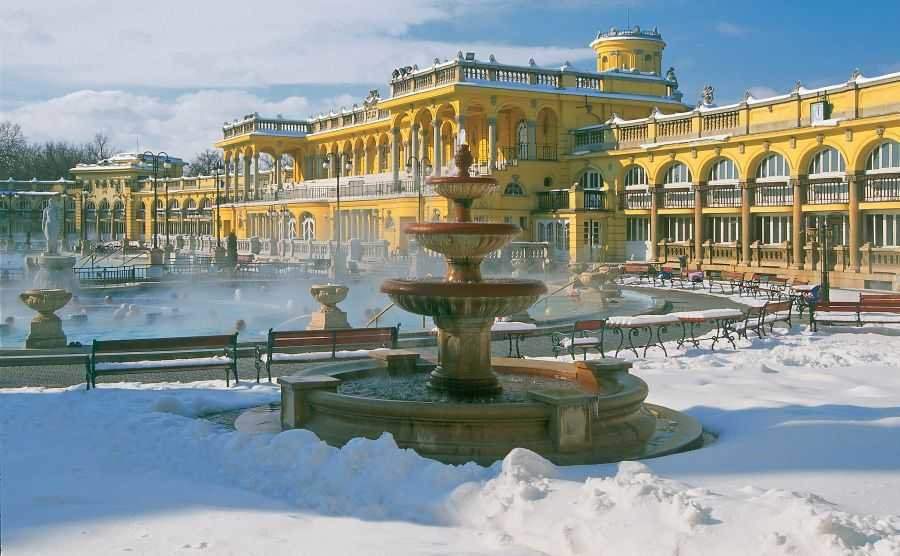 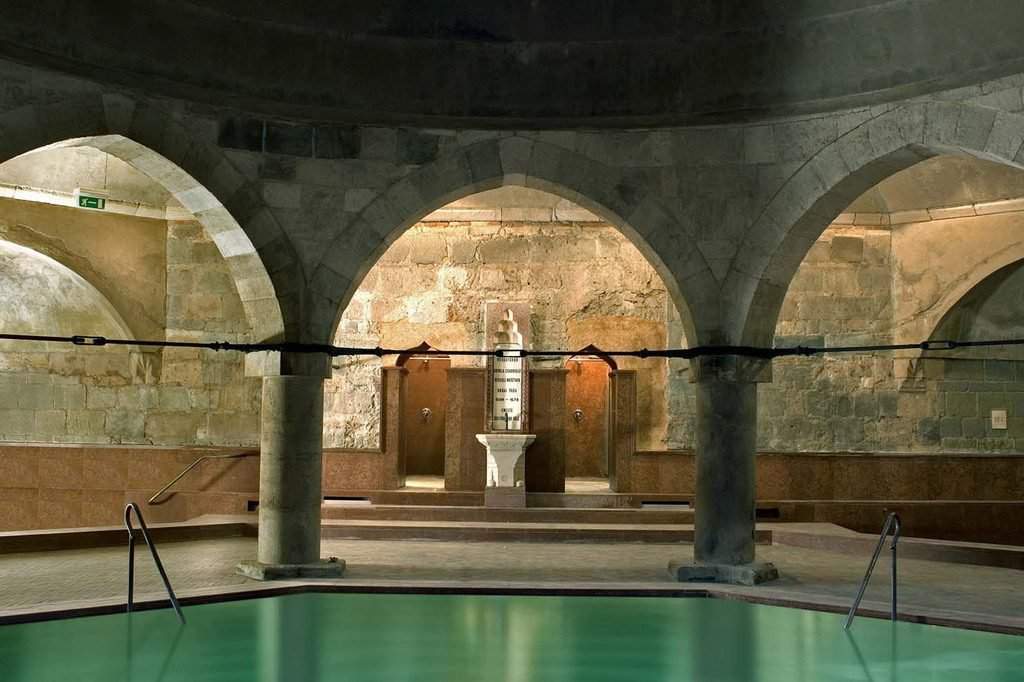 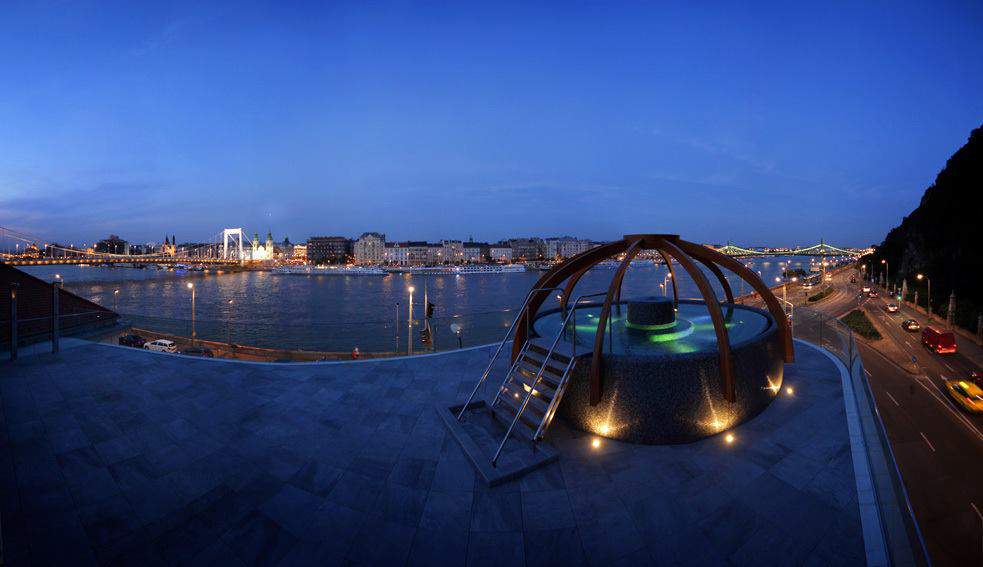 During the holiday season, some trams, buses and trolleys get dressed up for Christmas: they are decorated with enchanting fairy lights (consisting of 40 thousand colourful blinking LED lights) which make them look like they have arrived right from the North Pole, from Santa. The Christmas tram serves until the 6th of January. Tram 2, one of Europe’s most beautiful tramlines, will become a Christmas tram too, so you can enjoy a view of the sights on the Danube bank by taking it.

There is, however, a lesser-known Santa speciality, the Santa Claus Train, the former Hungarian Pioneer Railway. It allows you to explore the Buda Hills while listening to Christmas carols and watching dance performances just outside the station.

Hold on to your seatbelts as this train is run by children!

(with the supervision of adults, do not worry)

You might have heard about the Gozsdu Court, a hip café, restaurant, ruin pub in the heart of Budapest. Gozsdu organises weekly Sunday markets, so it is no surprise that they have given the markets a new wrapping, organising a Christmas Fair where you can grab the most fashionable and gorgeous vintage or retro accessories, clothes and décor. Even if you do not find anything to take home with you, the lively atmosphere and the great music provided by street performers will have a lasting impact on you. Do not miss the Fair that lasts until the 23rd of December every Wednesday through Sunday.

The Buda Castle and the Fisherman’s Bastion are must-visit spots in the city, especially if it is snowing – just imagine your vacation photos in front of the Matthias Church or near the Fisherman’s Bastion: it has a truly magical feeling. In addition, you can behold downtown Pest from here, including the Chain Bridge, the Parliament, and St. Stephen’s Basilica.

Speaking of St. Stephen’s Basilica: if you get the chance, visit its lookout tower to get a magnificent view of the Buda side of the city, too.

Budapest is often referred to as the Pearl of the Danube (it was almost named similarly), so why not enjoy a romantic or peaceful dinner with those closest to you while on a cruise? Tasty meals, live music and a view of Budapest will sweep you off of your feet. Luckily, there are cruises on both Christmas Eve and Christmas Day.

Or you can opt for just a wine cruise; after all, Hungarian wines should not be missed out on.

Budapest is well known for its excellent and classy theatrical, musical and opera scene, so we suggest checking out a performance while you are visiting. Although the Hungarian Opera House is currently under renovation, the performances are relocated to the Erkel Theatre, so

if you happen to be in Budapest during the holiday season, you might be lucky enough to be able to snatch some tickets to The Nutcracker.

Another option to consider for culture lovers in Budapest is the Müpa Winter Open Air Festival at the Palace of Arts, where, aside from musical performances and contemporary exhibitions, you can catch the Müpa Melody Wheel, the world’s largest interactive music box. If you are travelling with your family, your kids will love this venue, as there is also an ice rink and several circus performers, various concerts and other programmes, especially for kids.

Last but not least, if you wish to dive deep into the ancient history of Christmas, visit the Aquincum Museum where the Budapest Saturnalia festival is held. As the name already reveals, this festival of lights is dedicated to Saturn, the god of agriculture of time. It ends on the 23rd of December, on the winter solstice. Once you are there, check out the museum too, and the workshops, along with the antique gifts you can get for those who are waiting for you back at home.

The recently renovated Várkert Bazaar is worth visiting after you have explored the Castle District and the Buda Castle, as it lies right at the foothills of the latter. On the four Sundays leading up to Christmas, you can catch festive programs celebrating the Advent waiting: live theatrical performances, workshops where you can make your very own ornaments or decorating the Christmas tree in the Neo-Renaissance Garden on the 23rd.

If you get hungry, you can grab some traditional Hungarian food like lángos from the street food vendors, but also waffles and burgers.