The beautifully renovated look-out tower of the Hungarian Galyatető was only inaugurated last summer, however, it is already in competition for a prestigious architectural award. Szeretlekmagyarorszag.hu writes that the work of NARTARCHITECTS was chosen as one of the best works in the renovation category. Even though the winners will be chosen by a professional jury, the audience’s votes also count. 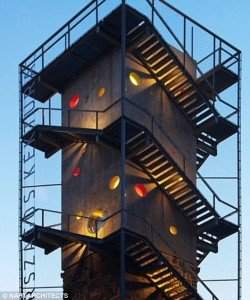 The tower became taller, got spiral stairs on the outside and three resting rooms were built for tourists. The view is now breath-taking during both the night and day. Several well-known online magazines like Daily Mail have appraised the magical look-out tower.

It is nominated for an international award that was established three years ago by architizer.com, Wall Street journal and Webbys. Two stations of the Hungarian metro line 4 (Fővám tér station and Szent Gellért tér station) won the award in 2014. These were designed by Sporaarchitects. They also got the prizes of the professional jury in the bus stations and train stations categories. There was another Hungarian winner: Art1st Design Studio’s Budapest Music Centre in the Architecture + Sound category.

The building was finished in 1934 and it was originally 17 metres tall. Nartarchitects thought that it would be a good idea to make the tower taller so that trees wouldn’t bother the view. Since the inner spiral staircase is too narrow for the current architectural regulations, the stairs were put outside. 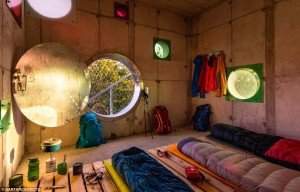 The architects used fair-faced concrete for the renovation, which suits today’s architectural trend. They also constructed a few a resting rooms and perked up the quite puritan interior with colourful portholes.

You can vote for the beautiful look-out tower on this link!