The first Spanish CAF tram was presented ceremoniously in the Fehervari ut site of BKV in Budapest, on Saturday. According to origo.hu, the 34 meter-long train was transported by trucks from Spain to Budapest, and it expected to operate in the fall, after the successful official exams.

Kalman Daboczi, CEO of the Budapest Transport Center (BKK) said on the show that rail systems had to play a more prominent role and for this, EU funds were required.

The fleet is getting younger 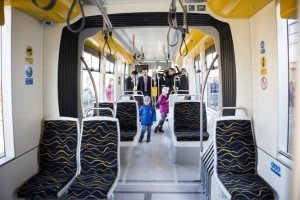 “Nostalgia vehicles are not able to maintain the traffic of a city of 2 million”, new trainsets, high-quality services are needed – the CEO said. He also mentioned that the average age of the trams in Budapest is 38 years, and by the arrival of the new CAF (Construcciones y Auxiliar de Ferrocarrilestrams) trams, the fleet can be rejuvenated only by4-6 years.

According to orgio.hu, the low-floor trams will be operating the lines no. 1, 3 and the Buda intertwined network. If, after the 47-piece order, the optional quantity in the contract would be ordered, CAF trams can appear in other areas of Budapest as well, he added. In addition to the official tests, BKK plans that to the final design, they ask for the opinion of the physically disabled and the large families – said the CEO.