The stunning replicas of Liberty Bridge in Budapest – Photos

The construction of Budapest’s third bridge over the Danube started in 1894 and finished in 1896. The bridge, originally named after Franz Joseph, is the third most iconic bridge in the Hungarian capital city. In World War II, it suffered serious damages and had to be rebuilt in 1945. Since then, it is one of Budapest’s favourite bridge. But did you know that it is not the only Hungarian Liberty Bridge in the world?

Pest Buda reported that news spread across the world that China’s biggest telecom company, Huawei, is building a new research centre in the city of Tongukan. The new research centre is going to consist of twelve parts which represent old European cities like Prague, Bologna and Oxford.

Huawei built a replica of Budapest’s old Liberty Bridge, and it is so on-point that even trams are taking workers from one part of the centre to the other.

Let us see some other amazing replicas of Liberty Bridge:

This bridge was opened to the public in 1911 and was designed by Hungarian architect Győző Mihailich. The bridge is a perfect replica of the one in Budapest, but if you examine the picture carefully, you will see that the bridge’s diagonal holders do not look in the same direction, and, of course, this bridge was smaller than the original. Unfortunately, it did not survive World War II and was exploded in 1944. The bridge suffered damages which could not be repaired and was not worth the effort.

If you are walking in Frankfurt Am Main, you probably recognise the German version of Budapest’s Liberty Bridge which was built years after the Hungarian one, between 1911 and 1912. The bridge has many connections with our Liberty Bridge.

You will also feel a sense of déja-vu if you are taking a walk in the town of Tver in Russia. This bridge was built in 1900 over the River Volga. This structure also has a difference in the bridge’s holders and pylons and is less elegant than the Hungarian one, so it is rather a German lookalike.

And, finally, we must mention that the first replica of Liberty Bridge was not built in Huawei’s new research centre first but over the River Songhua in China, as a cable bridge.

Why is Liberty Bridge’s structure so popular across the world?

Of course, this does not mean that the Hungarian capital city’s Liberty Bridge is just a bridge out of many with the same structure. In 1908, German professor Merthens introduced the bridge as the most beautiful one ever built. Although this architectural style was popular in every corner of the world, its most beautiful and perfect example is the Hungarian bridge in Budapest.

Liberty Bridge is said to be the most beautiful bridge in the world and an architectural masterpiece. It is also a popular pedestrian zone in the summer. 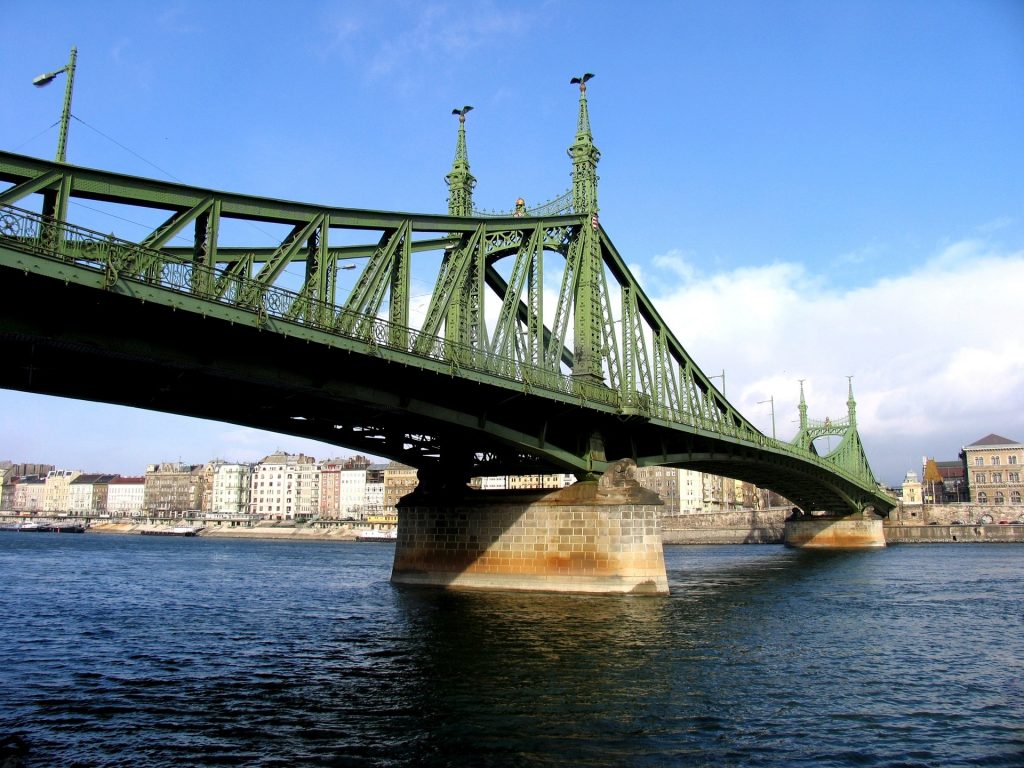