The board game of the year: Become a 1956 revolutionary!

Heroes were born in 1956. Heroes, who shed blood for their homeland. Heroes, who contributed to the freedom of Hungary. Heroes, who we should always remember. Kékjáték wants to commemorate these heroes on the 60th anniversary of the 1956 revolution with the Hungarian version of the Days of Ire: Budapest 1956 cooperative board game. It’s time for us to face the dreadful Soviet tanks and the tremendous State Protection Authority (ÁVH) just like our ancestors did.

The Hungarian version of the board game was introduced to the public on the 26th of October with great success. With the game you can relive the unforgettable days of the revolution. You can influence the outcome of the revolution by your own decisions and determination.

The Days of Ire: Budapest 1956 board game was originally launched in English in the summer of 2016 by Cloud Island, and then introduced to the transatlantic market with the help of Mr B Games. It is a historically inspired card-driven board game, playable by 1-4 people. It can be played both co-operatively or in a one-versus-many setting. It is set during the most explosive days of the 1956 Hungarian Revolution, in Budapest, where the fight was the fiercest. The revolutionary players collect cards and fighters to resolve events and other challenges posed to them by their Soviet opponent (real or simulated). In order to win, they must stay alive throughout the 7 days of fighting – while ensuring that the city doesn’t fall to pieces. 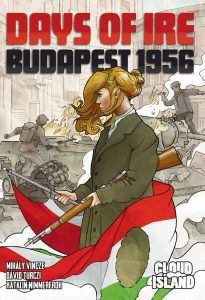 Why the game is likeable:

“It’s great that your tactical decisions – tension between concentration and dispersal – have strategic effects […] There are good peaks and troughs of tension as your plans unfold (or not!), and also a great build-up to a dramatic end point.” – Alan Paull, Surprise Stare Games

“This doesn’t play like your standard 1 vs many where the “GM” is encouraged to go easy and make sure everyone is having fun – this is a legit head to head strategy game where both sides don’t feel like they have to pull any punches” […] “This game brought to life an entire chunk of history I was previously unaware of, and did so in a memorable and interactive way” Chad McCallum

The coronavirus pandemic, which had claimed over 60,000 lives and infected more than…

No more than 2,000 tests were done in Hungary on each day since the...
We and our partners use technologies, such as cookies, and collect browsing data to give you the best online experience and to personalise the content and advertising shown to you. I accept
Privacy & Cookies Policy