Budapest, April 5 (MTI) – A French and a Hungarian artist have joined together to pay tribute to the victims of last year’s terrorist attacks in Paris. 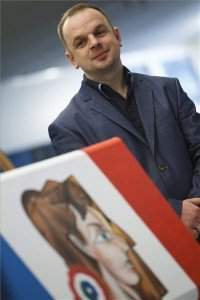 Using the colours of the French Tricolour, the work combines the profile of the female figure in Delacroix’s Liberty Leading the People with fragmented images.

Addressing the event, Szabo said the terrorist attacks in France and Brussels had targeted the people and ideals of Europe rather than the countries in question.

The French ambassador said the aim of the terrorist attacks had been to destroy European culture. The message of the painting is that joint efforts are needed to fight terrorism, he added.