To commemorate both the fallen and living heroes of the 1956 Hungarian Revolution against the tyranny of the Soviet regime, the Canadian side of Niagara falls was lit up in the national colours of Hungary.

The Consulate General of Hungary in Toronto wrote the following on their Facebook page:

The world’s most famous and iconic waterfall was illuminated with red-white-green colours to commemorate the 65th anniversary of the 1956 Hungarian Revolution.

The Hungarian Chamber of Commerce in Canada and the Consulate General of Hungary in Toronto welcomed a special guest of honour from Hungary: Ferenc Dancs, Deputy State Secretary of the Ministry of Foreign Affairs and Trade, Hungary paid his tributes to the heroes and heritage of the 1956 Revolution.

Hon. Michael Tibollo, Associate Minister of the Government of Ontario, H.E. Mária Vass-Salazar, Ambassador of Hungary in Canada and Valér Palkovits, Consul General of Hungary in Toronto and Sándor Balla, Chair of Hungarian Chamber of Commerce in Canada also participated at the ceremony. 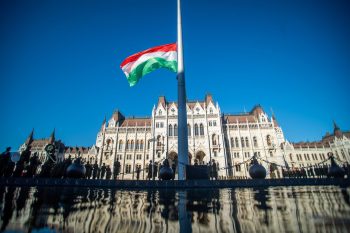