Having 18.498.743 monthly listeners on Spotify, an amazing song featuring AVICII, a brand new release named OWY; being one of the judges on The Voice UK and The X Factor, the singer, songwriter and actress, RITA ORA has confirmed: she is going to perform at the music festival EFOTT, held in 9-15 July 2019 at Lake Velence, Hungary.

Rita Sahatçiu was born in Kosovo. During the Yugoslav wars her family moved to London, where her father decided to change their surname to Ora, which is easier to pronounce. First, she started to sing in the pub owned by her family. After that, she was heard in Awkward by Craig David in 2007, which suddenly became her debut. Two years later she was selected to represent the United Kingdom at the Eurovision Song Contest, which offer she later refused to accomplish, claiming she was not ready to take a challenge as big as that.

After another two years she became well-known by Hot right now, a co-production with Dj Fresh. Right after that her solo career had just started. With R.I.P., which appears on her first studio album Ora, she reached the top of the hit lists worldwide.

She also had the opportunity to collaborate with AVICII on the song Lonely together, which has over 125 million views on Youtube on its official music video. 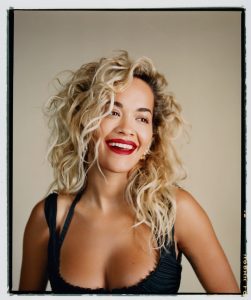 The pop diva has also worked with celebrities such as James Morrison and Iggy Azaela, but the biggest cooperation of hers is Girls with Bebe Rexha, Charly XCX and Cardi B, which has reached more than 57 million plays on Youtube since its debut in May 2018. Her songs are still played everyday not only on digital music services, but even on the radio. While being a famous singer, she also made time to be a coach on both The Voice UK and The X Factor, to help others with their music career. Not being shy to try new things she played different roles as an actress in many TV Series.

Following her appearance in Furious 6, she was also seen in the Grammy Award nominated Fifty Shades of Gray, as Christian Grey’s sister.

– Last year we had Jessie J as a headliner at EFOTT. We hope that this year’s pop diva with her strong voice, cool style, and extraordinary looks will make a great impact on every visitor. Last year Rita thought she had been in Budapest – we truly believe, that this year is going to be an experience which she will never forget: having a powerful performance and an extreme party at Lake Velence – said Gábor Maszlavér, CEO at EFOTT.

At EFOTT in 2019 visitors can enjoy circa 200 other music programs. The organizers have already pronounced Hungarian musicians, such as Halott Pénz, Majka, Margaret Island, ByeAlex és a Slepp, Tankcsapda, Supernem, Road and AWS. The full line up also contains Necc Party and many others, who will attend the one week vacation at Lake Velence, Hungary.