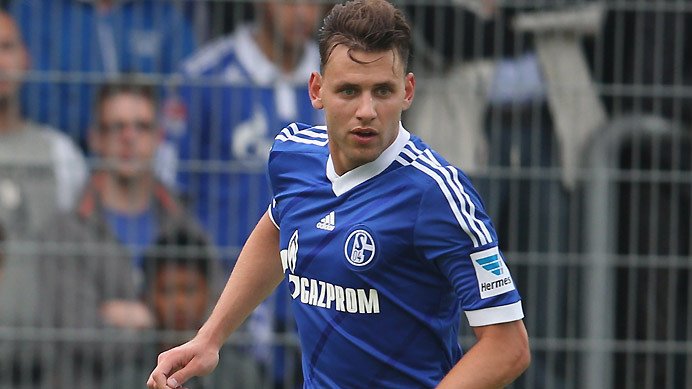 Gelsenkirchen – FC Schalke 04 steered clear of a further domestic setback, as they came from behind to defeat ten-man FC Augsburg 4-1 on home soil.Sascha Mölders gave the visitors a tenth-minute lead, but a red card for Ragnar Klavan and a consequent penalty, dispatched by Kevin-Prince Boateng, left the Bavarians in dire straits. Adam Szalai’s brace and Max Meyer’s first Bundesliga goal rounded off the scoring at the Veltins Arena sending Schalke above their guests in the standings.

What may have seemed a surprise in seeing Augsburg ahead of Schalke in the league table prior to kick-off looked anything but anomalous given the start the guests made to the game. Bold, confident and above all ambitious, Markus Weinzierl’s side clearly had no intention of setting up camp in their own half, and were duly rewarded with the opening goal in the tenth minute.

Matthias Ostrzolek’s cross from the left took a slight deflection on its way to the near post, where Mölders was waiting to turn the ball in for his first goal in ten games, ending a near 15-hour drought. Andre Hahn went within inches of making it two with a shot from distance, but things then took a turn for the worse for the visitors.

Klavan hauled down Szalai inside the penalty area, and having pointed to the spot, the referee promptly showed the Augsburg defender a red card. Boateng stepped up and, although Alexander Manninger guessed the right way, he was unable to reach the ball as the Ghanaian international grabbed his first ever goal on home soil in the Bundesliga and his third of the season for the Royal Blues.

As a consequence, Weinzierl ended Halil Altintop’s visit to his city of birth after just 18 minutes, defender Jeong-Ho Hong coming on to make his debut, but it was always going to be a big ask to keep Schalke out and an inevitable second soon arrived. Atsuto Uchida touched the ball expertly to Szalai, who, without hesitation, drilled the ball in from 12 yards out before Felipe Santana hit the post with a header shortly before the break.

Augsburg dropped increasingly deeper in the second half, rarely punctuating the home team’s possession, whilst Schalke goalkeeper Timo Hildebrand scarcely had to intervene. At the other end a moment of genius from Julian Draxler, who looked one way and passed the other, set up Dennis Aogo to cross low into the six-yard box where Szalai slid in to score his second of the game, Schalke’s third.

It was already all over for Augsburg, but not for Meyer, who followed up his first professional goal against Darmstadt in the DFB Cup with his first Bundesliga strike four minutes from time, coolly slotting the ball in after nutmegging Jan-Ingwer Callsen-Bracker to round off a resounding result.