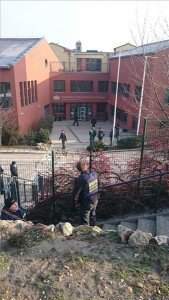 Several police cars appeared at the foundation school and evacuated the institution in the 3rd district. The disaster management and demolition experts were also present.

The students were sent home because of the threat, so the school was empty by 11 o’clock. The policemen, who performed the evacuation, did not inform origo.hu. They said the Budapest Police Headquarters (BRFK) press office would tell additional details.

It is not the first time when the school has been threatened. Most recently, the British International School received a phone call about a bomb threat on December 9. The Counter-Terrorism Center (TEK) went there, but they did not find any explosive devices.

At the same time, the Stockholm institute of the British International School had to be evacuated. According to Local.se, the evacuation began at 9:44 am. All the 250 students and teachers were rescued, origo.hu wrote.