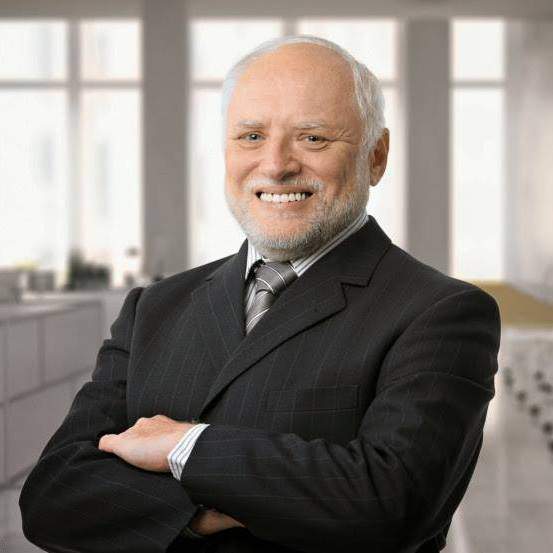 If you meet András Arató on the street, he looks like a typical 70-year-old retired man living in Budapest. However, András has become one of the most popular and beloved internet memes within the past few years, and he has thousands of fans from all over the globe. Get to know the lovely András, or as the internet knows him: hide the pain Harold.

The Hungarian pensioner is known across the globe as one of the most popular and funniest internet memes. Today, memes are essential parts of youth culture worldwide.

What is a meme?

An internet meme is an activity, concept, catchphrase or piece of media which spreads, often as mimicry or for humorous purposes, from person to person via the Internet. It might be an image, a hyperlink, a video or hashtag, maybe it is just a word or a phrase. Memes tend to spread from person to person via social networks, blogs, direct email, or other news sources.

How did a regular 70-year-old man become an internet sensation?

TV2 made a report with András in his home in Budapest. The video can be watched in Hungarian here. András’s meme career started years ago when he posted a photo of himself on the then-popular Hungarian social media site: Iwiw. The photo was taken of András when he was on holiday in Turkey.

A photographer noticed the picture and immediately contacted András. The photographer asked him to be a model for a series of stock photos. Stock photos are collected and stored in a huge database, and the customer can order them as illustrations for various graphic designs, web pages, etc. Some people on the internet, however, decided to get creative with András’s photos.

András finished the photo shoot and probably forgot about it for a while. Later, however, he was too curious not to look at what his photos were used for.

“Everybody is a little bit frivolous. I tried to see what my face was used for, so I searched for it. Of course, I found many pages where my photos were used “in a normal way”, what they were meant for. Somewhere I was a doctor, in another place I was a grandpa. Then, I found a website where people made memes out of my photos. I was not quite happy about that.”

The essence of the hide the pain Harold memes is that András’s smile does not seem so genuine in the stock photos, and the joke is that he looks like he is trying to hide some serious pain behind his smile. Even though he is smiling, he does not seem happy at all.

Even András acknowledges that his smile seems a little bit forced on the photos.

“I had to smile for a long period of time. Even I see that it is not my true, natural face.”

At first, András was not happy about the memes people created. Since then, he made his peace with it. In fact, he admitted that even he himself created memes when he was younger.

“When we were in school, we used to make memes. In our course books, we drew on János Arany’s (famous Hungarian poet) picture and made him a pirate. This is basically the same thing.”

Now, the 70-year-old retired electrical engineer lives in Budapest (he is from Kőszeg) with his wife, who is not so thrilled about her husband’s memes.

“I did not like this at all. This is abusing someone’s personal space.”

András has a huge fan-base on his social media account. When he created his Russian account, he got more than 20,000 followers in two days. His posts usually get 150 likes in a minute. More than ten thousand people love him and his memes from Russia to the United States. He is a pretty big deal on the internet.

He said that he created his social media account to show that he is a real human being just as the people who make memes from his stock photos.

He likes some of the hide the pain Harold memes. His favourite is the one where his face is photoshopped on Mount Rushmore.