It’s probably no exaggeration to say that yesterday all Hungarians cheered for our national football team as one person. For those who haven’t heard, Hungary beat Austria by 2:0 in the first round of Euro2016, which is an amazing success. People went mad from joy on the streets of Budapest as we all shouted ‘GOAAAL’. Who knew that the team would debut such greatly at the European Championships after 44 years. The community-forming power of cheering and football brought us all together, and we can’t wait to see what’s going to happen next. For now, we collected what the international press wrote about the victory.

The tone of most articles could be described as surprised and shocked. ABC even titled their article ‘Hungary shocks Austria 2-0’ and went on with describing Szalai as nobody’s idea of a prolific scorer and his goal as a rare one. “Tamas Priskin, who had replaced scorer Szalai, sent Stieber racing through to grab the second goal in front of thousands of delighted Hungarians.” ABC also called the fans the “two of the noisiest sets of supporters yet seen at the tournament”.

The Telegraph wrote that “Hungary made a triumphant return to a major tournament” and described the goals like this: “Szalai fired Hungary ahead on 62 minutes” and “Stieber triggered delirious celebrations when he raced from just inside the Austria half to beat Almer three minutes from time with a sublime chip as Hungary completed a stunning upset for their first European Championship win since 1964”. 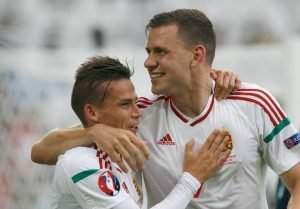 Eurosport also expressed their surprise by stating that “Hungary upset the form book to beat neighbours Austria 2-0 in their first European Championship match since 1972, kick starting their campaign with an impressive display.”

UEFA writes that this victory was not only vital for Hungary’s chances of qualifying for the Euro 2016 knockout phase, but it was also a moment of special joy for those victorious players who had a special point to prove following indifferent experiences at club and international levels recently (mainly referring to Ádám Szalai, who hasn’t been able to score a goal for Hungary since December 2014). The closing sentences of the summary are heart-warming: “Maybe this team of Magyars is mightier than they’ve been given credit for. Thankfully, after their superb hard-fought victory in Bordeaux, these untrumpeted stars may well earn more opportunities to impress the doubters.”

Goal.com used a quite suggestive title for their article: “Who said God was all-powerful? (referring to Pep Guardiola’s saying that Alaba is the ‘God’ of Bayern Munich) Heroic Hungary make history as Alaba’s Austria flop” The article praises Kleinheisler for his keen eye for passes and ends with the sentence “Kiraly and his colleagues had achieved immortality, while Austria and their footballing ‘God’ had been brought crashing back down to earth.” 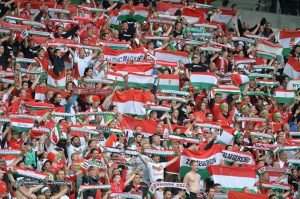 BBC Sport also described our win as a shock during the opening matches of Group F. They noticed that this is a memorable win for our country. “They might not have had as many household names as their rivals but they had more of a team ethic and were rewarded when Szalai – having been involved in the build-up twice – put them in front. In the closing moments Stieber coolly lifted the ball over the keeper to seal the win.”

CNN Sport started the summary with the rhetorical question of “Faded glory restored?” The article touches upon a little history, the “Magnificent Magyars” and then illustrates the two Hungarian goals, which sent “those Hungarian fans behind that goal into raptures”.

Thestar.com, just like most articles, mentioned our goalkeeper, Gábor Király and the record he set by being the first 40-year-old player to participate in the continental championships. It’s quite entertaining to read how obsessed people are with his signature grey sweatpants, which actually made him steal the limelight in quite a few match summaries. Some people even made memes with Király.

Congratulations and the best of luck to the Hungarian team!!!