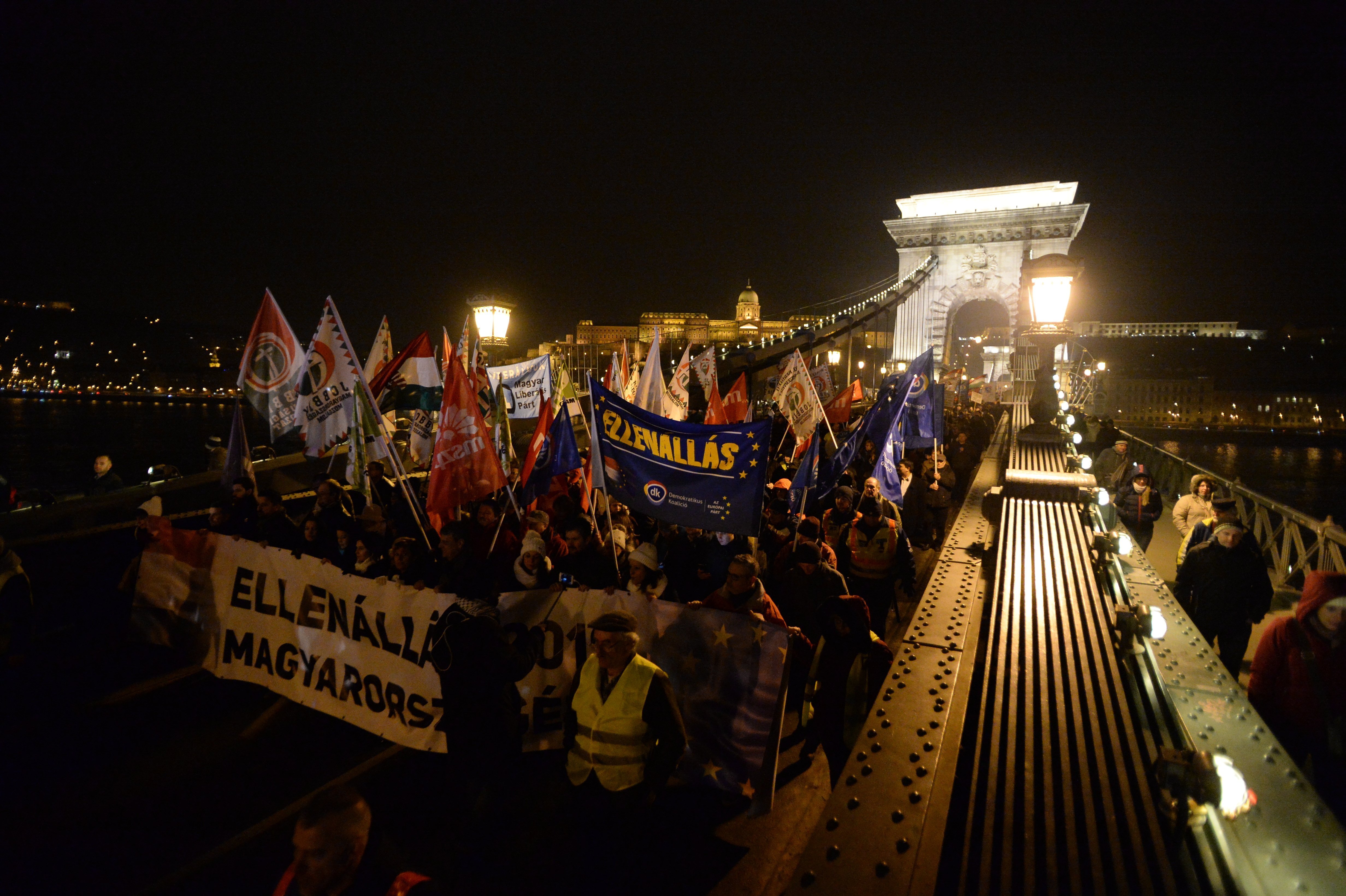 Speakers at a joint demonstration of the opposition parties criticised Prime Minister Viktor Orbán’s state-of-the-nation address and challenged him on the state of democracy in Budapest on Sunday.

About 1,000-1,500 demonstrators gathered in front of the President’s Office and the Prime Minister’s Office in Buda Castle, with activists holding flags of the Socialist, DK, Jobbik and Momentum parties. 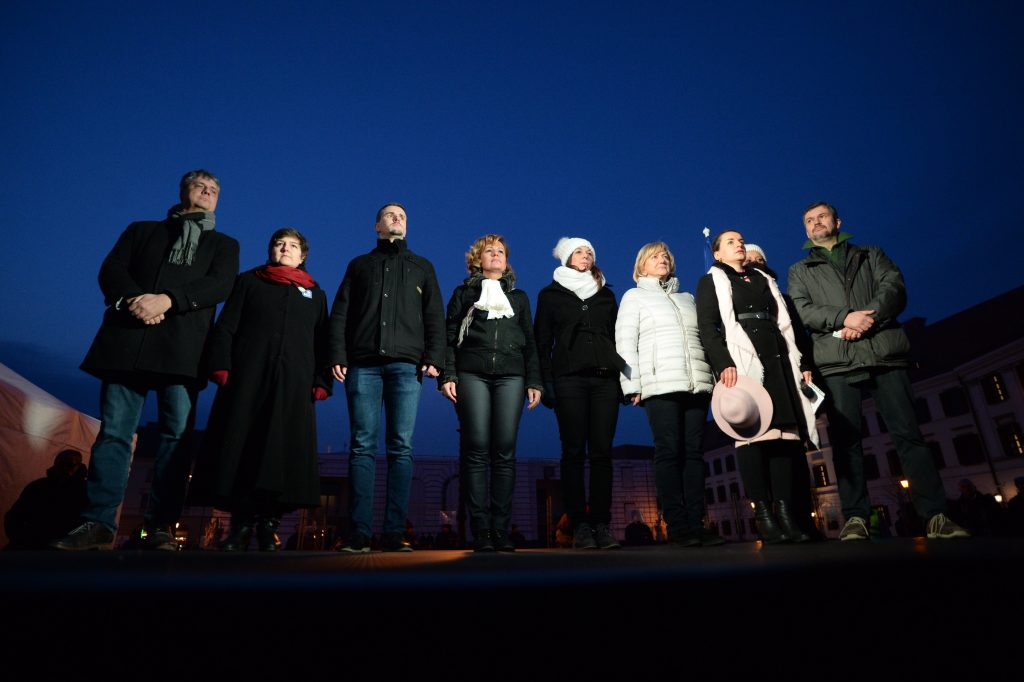 He said Orban’s state-of-the-nation address ignored the deceived foreign currency loan holders, pensioners who do not receive their pension on time, and young people who cannot go to university to continue their education.

Péter Jakab, spokesman of Jobbik, said Orbán had “thrown ten thousand people out on the street” in three years, and “turned his childhood crony into the richest man in the country”.

Jakab said the State Audit Office (ÁSZ) is sanctioning the opposition in order to prevent them from campaigning in the European parliamentary election and the municipal election, accusing Fidesz of preparing for election fraud.

Erzsébet Schmuck, deputy parliamentary leader of the green LMP, said Orbán had made a huge mistake by adopting the “slave law” because this meant turning against Hungarian workers.

She said the prime minister had announced his family policy measures because he had realised that he could not win the European parliamentary election by constantly talking about migrants.

Anett Bősz of the Liberals told her audience they needed to give courage and faith to those who were “trodden on” by the government, and to rebuild the rule of law and democracy.

members of the next generation will only be able to have a better life than their parents if they leave their country to study and build a future for themselves abroad.

Balázs Nemes, spokesman of Momentum, said “hope is spreading” because “the Fidesz regime has already failed in the capital”, and first major cities, and later smaller towns will follow suit. 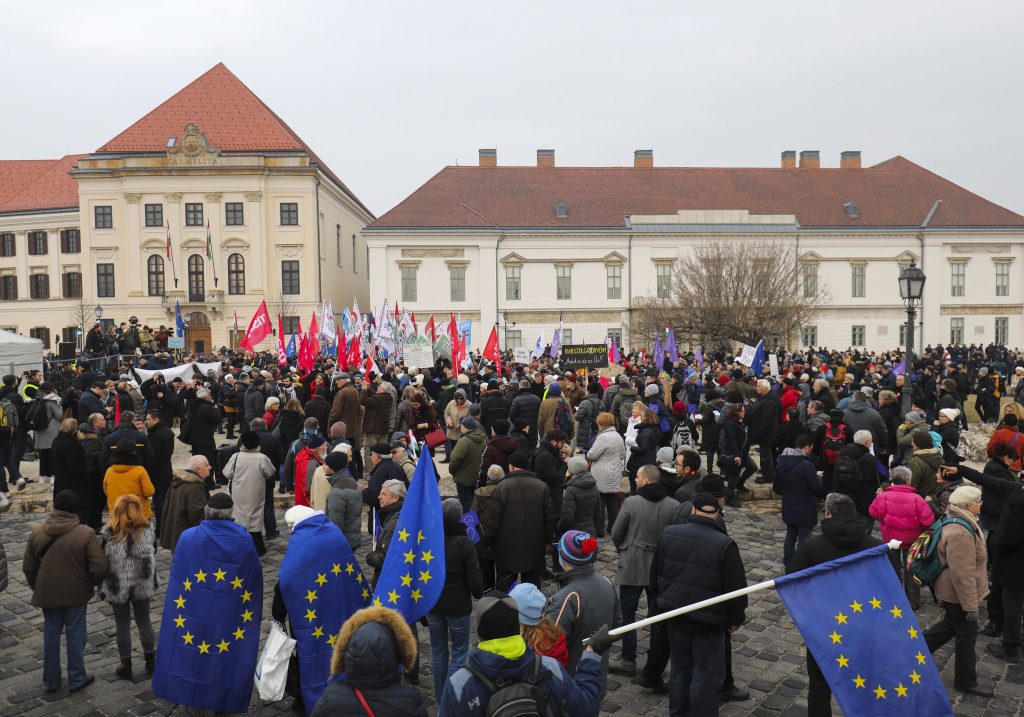 Independent MP Bernadett Szél said Orbán wants to see “a stupid country with dumbed-down subjects”, this is why he chased away the country’s best university and enchains the others or converts them into private universities that “only his cronies can afford”.

“The Hungarian Academy of Sciences was founded by the greatest Hungarian and the smallest Hungarian wants to put it in the grave,” she said.

Protesters marched over to the headquarters of the State Audit Office to continue the demonstration.

Representatives of the opposition parties said the governing Fidesz party is trying to use the office to hamper their activity by administrative means.

At the end of the demonstration, protesters placed stickers with the words “Fidesz party headquarters” on the entrance of the ÁSZ headquarters.

The Democratic Coalition (DK) will file charges for “government brutality” because they say a security guard hit a party activist, Gergo Varga, at Sunday’s demonstration during the prime minister’s state of the nation address, the leftist party told a press conference on Monday.

During the demonstration at Budapest’s Várkert Bazár, activists placed sheets of paper reading “Thief” and other slurs on the cordon, Varga said. One of the security guards lashed out at him, he said. Police also stopped them from projecting an image slamming Prime Minister Viktor Orbán on the building of the Hungarian Academy of Sciences during the demonstration, he added.

DK spokesman Sándor Rónai said that the party will file charges of brutality against the security guard and a complaint with the Independent Police Complaints Board for what they see as curbing their right to free expression.